Home » About Us » Board of Directors

Baron Jean Stéphenne is a highly experienced life science executive who has been at the helm of a large number of biotechnology and pharmaceutical companies. He currently holds the position of Chairman and Supervisor for CureVac AG and of President of the Board of Nanocyl, Vesalius, BePharmBel & BePharBel Manufacturing, Bone Therapeutics and OncoDNA. He is also President of Welbio and University Foundation of the Université Catholique de Louvain as well as a board member of 6 other companies.

Previously Jean Stéphenne was a Member of the Corporate Executive Team of GlaxoSmithKline (GSK) and Chief Executive of GSK Biologicals (now GSK Vaccines). During his 40-year tenure, he grew a company of 50 people into a fully-integrated worldwide leader in vaccine development with 12,000 employees.

For his contribution to the Belgian economy and global public health, he was honored on various occasions and received various titles from the Belgian and British governments.

A graduate in both Law and Economics, François Blondel currently combines his executive functions as CEO of KitoZyme and Delphi Genetics, and as Executive Chairman of KiOmed Pharma, with non-executive board memberships, either as chairman of the board or as an independent board member.

As an entrepreneur, he has (co)founded several start-ups and gained broad experience in the management of innovation driven companies. From 1999 to 2010, he served as CEO of International Brachytherapy (IBt), a NYSE-Euronext stock listed company, and helped the company develop from a R&D stage to a successful and well-diversified international group that became a European leader in its market segment.

The companies in which he is currently or has been active in range from SME’s and spin-offs, such as OncoDNA, Nanocyl and Delphi GENETICS, which are active in the technology, medical or healthcare sectors, to major listed companies, including RECTICEL or Compagnie du BOIS SAUVAGE and public authorities, such as AWEX, AMONIS and BioWIN.

Dr. Courtieu joined IntegraGen as CEO in September 2007. Prior to this, he had achieved significant success within Gemini Consulting’s Life Sciences division, France, first as Practice Leader, and later on as Vice President. Dr. Courtieu’s tenure with Eurostart, Bossard Gemini Consulting and Cap Gemini Ernst & Young resulted in much hands on experience in how to improve the operational performance of pharmaceutical companies in the fields of Research and Development, Industrial Operations, Supply Chain and Marketing and Information Systems. Later on, Dr. Courtieu took the position as Country Manager, France, at Ariba, the world leader in spend Management, assisting companies in analyzing and managing their corporate spending to achieve maximum buisiness process efficiency. Dr. Courtieu holds an MBA from the Instituto de las Estudios Superiores de la Empresa (IESE) in Barcelona, Spain and he also received his doctorate in Veterinary Medicine from the Ecole Vétérinaire d’Alfort and University Paris XII, France.

A civil engineer by training, Alain Declercq holds an MBA from the University of California, Los Angeles (UCLA). He started his career as a financial analyst at Exxon Chemical Belgium where he rapidly became the Head of the Treasury Department. He was later appointed as an assistant to the International Controller of Exxon Chemical, coordinating the financial results of more than sixty subsidiary companies in Europe, Africa and the Far East. In 1992, he became the Chief Executive Officer of Banque CPH and in 2007 became Chairman of the Board for the company. He continues to serve in executive roles at Banque CPH while also being a non-executive member of several board of directors for other companies.

Biologist by training, Mrs. Emmanuelle Deponge obtained her PhD in Molecular and Cellular Biology in 1994 after being graduated as a Biology Engineer at Polytech in 1989. She obtained a LLM in Intellectual Property Law in 1998. She spent her first 15 years of professional experience in various healthcare and life science organizations including a non-profit patient association (AFM-Telethon), a biotech company in gene therapy (PrimeBiotech) and a cancer institute (Institut Curie). In 2007, she joined APICAP, an independent investment management company, where she developed the venture capital practice dedicated to healthcare and life science. End of 2017, she joined Go Capital as a venture partner in life sciences. She has invested in more than 15 companies in medtech, biotech and other companies like CRO in France and in Europe among which Axes Vision Technology, Biom’Up, Cellix, Echosens, Median technologies, Nanobiotix, Neovacs, ProductLife Group, Repropharm Vet, Trophos and Igyxos.  She invested and was on the board of Trophos when it was sold to Roche (CH) in 2015 and she was on the board of Echosens when it was acquired by FuRui (CN) in 2011. She participated in the quotation on Alternext and Euronext of several companies: Biom’Up, Median Technologies, Nanobiotix and Neovacs.

Jean-Pol Detiffe is an industrial pharmacist by training with over 20 years of experience in the healthcare sector. Jean-Pol is a dynamic Belgian entrepreneur who founded OncoDNA in 2012 with the ambition to help individuals with cancer all over the world benefit from a personalized analysis of their tumor based on the latest DNA sequencing technologies. Prior to this he founded DNAVision in 2004, the first company in Europe to provide the pharmaceutical industry with accredited pharmacogenetic tests (exit in 2012).

Dr. François Thomas is a medical oncologist, former assistant professor at the Gustave Roussy Institute, and holds an MBA from the Massachusetts Institute of Technology. Dr. Thomas is in charge of the Inserm Transfer Initiative (ITI) Funds at Sofimac, where he is venture partner. His multi-disciplinary experience has led him to positions of VP Clinical Development at Ipsen, General Manager of the consultancy Bioserve Ltd, VP of Licensing and Medical Affairs of Genset, and President of Cynthéris. He has also been a venture partner at Atlas Venture and Head of Healthcare Banking at Bryan Garnier. Dr Thomas has dedicated his last 20 years to the creation and development of  biotech companies and is or has been a Director for more than 20 of these companies. 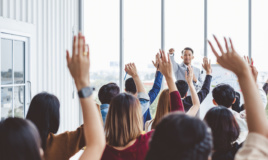